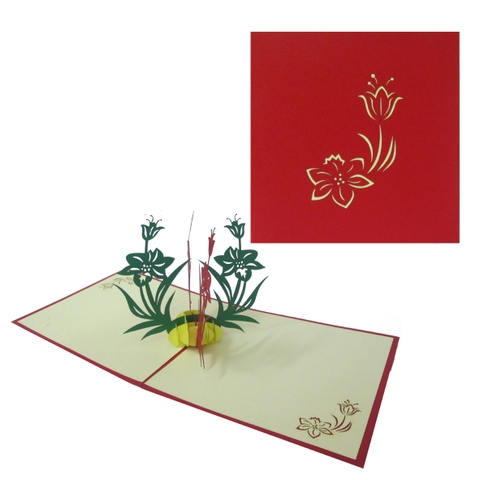 Lilies most commonly mean devotion or purity, though meaning can vary by type of lily, culture, and color. Because of the Greek myth of Hera and Zeus, lilies are associated with rebirth and motherhood. In China, lilies are used at weddings because they are tied to 100 years of love. They are also tied to good luck.

Inspiration For Lilies Pop Up Card

In alchemical symbolism, the lily meaning is associated with lunar and feminine qualities. Christians hold the lily as a symbol of chastity, innocence, purity, and piety. In early Christian art, the white lily is symbolic of the “Madonna” as the flower is associated with the virgin Mary.

Occasions for Lilies Pop Up Card

Lilies Pop Up Card is one of the most iconic flower pop up cards. This card is significantly meaningful and is such a sincere gift for your family and friends. Lilies pop up card is perfect for birthdays, anniversaries, and ceremonies.